Consider a Tablet for Seniors Carefully

- Lately there's been a lot of buzz about the perceived popularity and usefulness of tablets for seniors. Unfortunately...

at the same time there has been virtually no data to support the hype surrounding the assertions that seniors are embracing tablet technology or that a tablet is the best device for seniors.

One of the few studies in the professional literature that has been undertaken on the topic of seniors and tablets is Franz Werner and Katharina Werner’s “Enhancing the Social Inclusion of Seniors by Using Tablets as a Main Gateway to the World Wide Web.” This study found that seniors seem to view tablets as more approachable than personal computers because of two characteristics:

However, they also observed that the user interface inconsistencies among the various tablet applications, or apps, often presented significant learning challenges to seniors. Because every app is so different, users had to learn a new program every time they used a new app. Basics such as how to navigate the screen, the location of the buttons, and the look of the program and its graphics can differ significantly between each app; and for someone learning computers for the first time, this can be confusing. 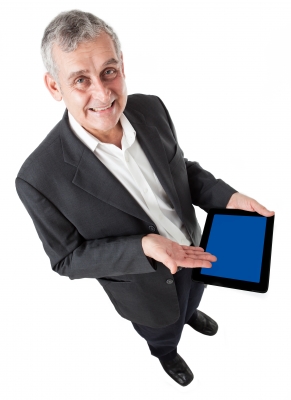 Moreover, these usability problems occurred even though the tablet apps were set up for each senior before they received their tablet, and each senior also received periodic technical assistance in learning how to use their tablet's apps. It was concluded that, while all seniors in this study responded positively to a tablet device, “. . . barriers were found that cannot be overcome by using a tablet.” The seniors’ ability to use the device effectively required both:

1) the pre-configuration of apps on the tablet

2) the on-going technical support from a friend, caregiver, or family member

Beyond this apparent confirmation that any device is only as good as its user interface, there are other characteristics of the tablet that may be problematic for some seniors. These include:

1) size of screen: even with magnification, may be too small for those with significant vision problems

2) reduced weight of the device: while enhancing portability, may also present stabilization problems for the physically disabled and/or those with limited manual dexterity

Undoubtedly, there are seniors without significant vision and physical impairments, many of whom can benefit from tablets. And for those who plan to travel a lot and want to bring their computer along, a tablet may be a good choice. But as it stands, tablets are not the final answer for all seniors. The key to the effective use of these, or any other computer devices, appears to be an easily accessible user interface.

Determining the best type of computer device for a senior user should take into account the needs and capabilities of that user, with careful consideration of the quality of the device’s user interface.