A few years ago, I had an amazing opportunity to get to know one of my grandparents. My grandfather, Guido Allegrezza, was a soldier in the US Army...

During his time in the Army and oversees at age 19, Guido frequently wrote letters to his older sister. These letters detailed his time in boot camp and training for battle, while also expressing how much he missed home. Guido’s sister saved these letters.

While studying World War II in school, I took the opportunity to delve into my family records and learn about the grandfather that I never actually met - Guido had passed away just a month before I was born. 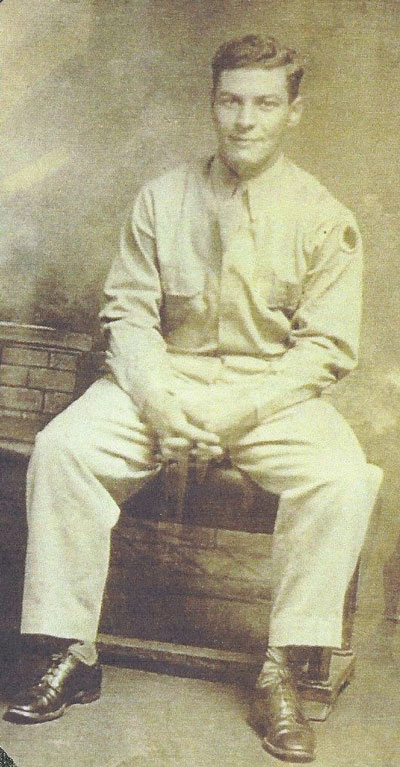 These letters brought my grandfather to life for me. I read about how he spent his Christmas oversees, how he couldn’t stand being confined to his bed in the hospital after being wounded, and how he couldn’t wait to see his new niece when he finally got home. In addition to the letters she saved, Guido’s sister also preserved the Western Union telegrams that her mother received announcing his MIA status. She told me the story about as soon as her mother saw the Army official standing at the door she started screaming and crying before he even told her the news. When reading the telegrams, I cannot even begin to imagine the pain and fear that Guido’s family felt. Weeks later they received noticed he was captured as a POW and was alive. The good news arrived just a few months later when the Allied Forces took over and released the prisoners, and Guido's mother received another telegram explaining that her son was alive and free.

I can’t quite express how special it was for me to feel so connected with my grandfather. I know that I am very fortunate to have three living grandparents, but I’ve also always felt a sense of loss at not meeting the man who fell in love with and married my grandmother, who raised and shaped my own father, and who made such an impact on his entire family.

In today's world, some recall with an understandable sense of sadness, the "good o' days" of letter writing and Sunday night dinners at the grandparents' with the extended family. As families become increasingly mobile and geographically separated, staying in touch and getting to know one another becomes more challenging.

But maybe it doesn't have to be.

Technology helps us stay connected. Email, photo sharing, videochat, and Facebook are all amazing tools that, if we take advantage of them, can bring us closer together. Our mission here at Telikin is to keep people connected. Now more than ever, enjoying a close relationship with living grandparents who lives far away can be easily achieved.

This Grandparents Day, I will be doing a face to face video chat call with my grandparents who live 1000 miles away. I do miss seeing them on a regular basis, however, video chat helps to bridge the miles between us.

Please share your stories about how you keep in touch with your grandparents and what you'll be doing to celebrate Grandparents Day today.